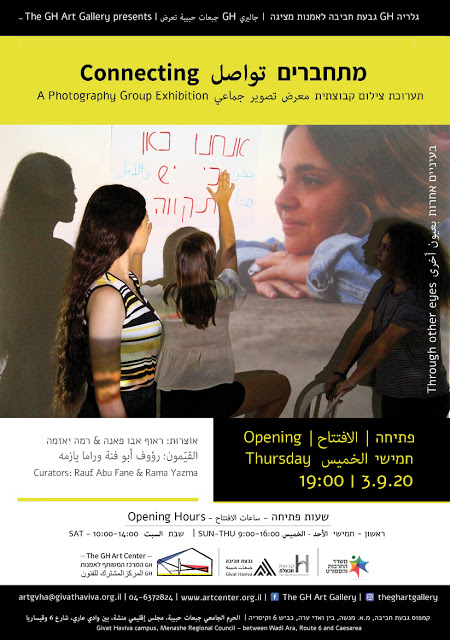 The GH Art Gallery presents
Through other eyes 2020
Connecting
A Photography Group Exhibition
15.12.20 - 3.9.20
Through Other Eyes 2020 Present:
CONNECTING
Throughout the year, the joint photography group "Through Other Eyes" dealt with intercultural acquaintance, inquiry, asking questions and strengthening the bond between youth from Jewish society and Arab society.
The program so far has provided the teens with a close acquaintance with the main social issues facing society in Israel, including: inequality, racism, violence, mutual distrust, undermining the democratic foundations, transparency, education and more.
Over the past few months, they have channeled their skills and love for the medium of photography into a space where they can influence an issue that is close to their hearts - the Arab-Jewish conflict / creating a shared society.
The exhibition is called "Connecting" and indicates the desire and aspiration of the group members to connect in the present, while in the background, in Israel, a fourth election campaign is looming amidst a series of crises following the outbreak of the global Covid-19 pandemic. Despite the great difficulty and challenge, and despite the inability to meet physically, the group continued to engage in connections even in the days of lockdown and isolation - to be in touch, to be in action and not give up the complex but desirable connection between the two societies.
The term "connecting" indicates the mutual interaction between two people or more. It is a process, an action that repeats itself but is not yet complete. In this exhibition, there are images of connections made with the help of a projection technique and the integration of the participants physically on the projected image next to a text that they wrote together and which they chose to present.
The medium of photography has, from its early days, explored reality and how new statements about reality can be expressed by connecting images, from photomontage (assembling several different photographs into one, often creating the impression that the resulting image is a realistic photograph captured in this form by the camera lens) to Photoshop (In the computer age, photomontage is done using image processing software, and has become a simpler and more accurate operation).
Here, a technique was used that combines the physical dimension with the "screened" projected dimension, together with concise text. In each image, no more than two participants play a live role. This gives you, the viewers, a new "montage" option, which is interested in connecting the physical and the virtual, while conveying the message that each period puts together, on the same plate as it were, both the problems and the solutions.
The exhibition is, in fact, an invitation for each of the viewers and visitors to connect to the medium, to the essence, to joint action and to prayer - to more present and future connections.
Rauf Abu Fane and Rama Yazme
Program facilitators and exhibition curators
display:none;
חסר רכיב
מודעה חדשה