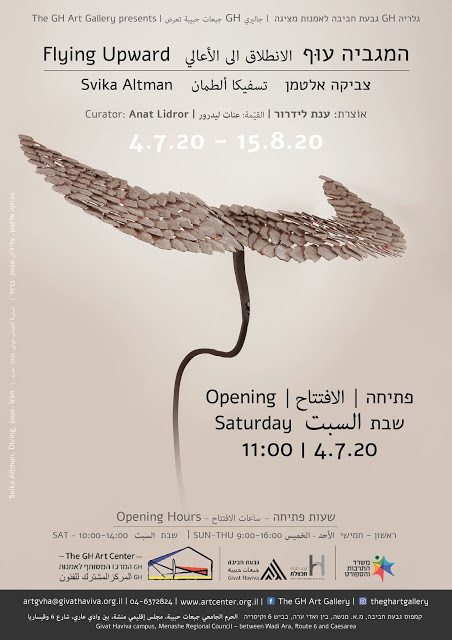 Flying Upward
Svika Altman
Sculptor Svika Altman's solo show at the GH Givat Haviva Art Gallery sums up years of sculpture and research in material and spirit, and over four years of flying in the realm of consciousness.
The exhibition creates a sculptural space in a wide range of materials, most of them heavy, which surprisingly create an airy space between them. The materials involved (basalt, iron, marble, stone, glass, industrial wood, tin, aluminum, sand, paper, writing) have physical, specific and spiritual weight. The sculpture materials, from the heaviest to the lightest, create unwritten poetry: for the air, the wind and
flying in its various forms: aviation, circular, vertical and horizontal flight, diving, gliding and soaring. Between the lines, Altman draws one continuous line connecting matter and spirit.
חלל, 2016. אבן
Svika Altman's father worked for Israel Aerospace Industries for many years. Svika himself has an inexplicable fear of birds. Here he finds himself sculpting them repeatedly in different materials and relationships. He sketches out their - our - flight options.
Altman works in close interplay with an assortment of sources, including Judaism as a cultural and spiritual way of life he explores in his personal life; the wisdom of Rumi, considered to be the finest Sufi poet and thinker, through which he practices a meditative Sufi dance; and the groundbreaking 1970 book, Jonathan Livingston Seagull, By Richard Bach, with Russell Munson's unforgettable photographs.
For entire generations this book was a shining example of the power of thought to influence the physical world we live in, as well as the ability of the
seagull within each of us to fly. It was also a milestone in the perception of personal ability to rise beyond the conformist tendencies of a flock, group or society, and to choose otherwise.
Jonathan Livingston Seagull accompanied Svika and then the two of us in our
discussions throughout the process of creating the exhibition. Birds use movement to live. Visionaries use it to evolve. They are the ones who go out of the ordinary, who see far, beyond the imaginable. They do this through the body while practicing flight, a practice based on movement. The movement motif is the one that allows them to move forward and move on. Being part of the physical world, such practice is considerable and Sisyphean. The classic sculpture medium is essentially the exact opposite of movement. Yet it is in that same Sisyphean manner that Svika Altman works and thinks.
For Altman, the concept of the human being as the creator who chooses the degree of his/her development and is not a victim of circumstance, and the personal ability of each one of us to create reality, comes from the most basic place: he carves in stone and iron, bends and cuts, chisels and engraves. The creative process is accompanied by tremendous physical effort, with heavy tools, but it does not stop there. It is complemented by a refined process that treats the piece in many ways as a jewel.
With each of these sources, he dances a long and deep dance, alive with joy and faith.
פריים מתוך: אחד, 2020. וידאו ארט, 6:45 דקות
Svika Altman is a Givat Haviva man. He worked here, made sculptures, taught sculpture. He is an example of the possibility of the simultaneous existence of a variety of opinions in one space. His work, One, a video art that is an exceptional piece in the sculptural space, manifests his belief in the coexistence of all religions.
“The gull sees farthest who flies highest.”
(Richard Bach, Jonathan Livingston Seagull)
Anat Lidror, Curator
"To begin with," he said heavily, "you've got to understand that a seagull is an unlimited idea o freedom, an image of the Great Gull, and your whole body, from wingtip to wingtip, is nothing more than your thought itself."
(From Jonathan Livingston Seagull by Richard Bach)
If our friendship depends on things like space and time, then when we finally overcome space and time, we've destroyed our own brotherhood! But overcome space, and all we have left is Here. Overcome time, and all we have left is Now. And in the middle of Here and Now, don't you think that we might see each other once or twice?
(From Jonathan Livingston Seagull by Richard Bach)
"We can start working with time if you wish," Chiang said, "till you can fly the past and the future. And then you will be ready to begin the most difficult, the most powerful, the most fun of all. You will be ready to begin to fly up and know the meaning of kindness and love."
(From Jonathan Livingston Seagull by Richard Bach)
מ

"I want to learn to fly like that," Jonathan said, and a strange light glowed in his eyes. "Tell me what to do." Chiang spoke slowly and watched the younger gull ever so carefully. "To fly as fast as thought, to anywhere that is," he said, "you must begin by knowing that you have already arrived…"
(From Jonathan Livingston Seagull by Richard Bach)
He spoke of very simple things - that it is right for a gull to fly, that freedom is the very nature of his being, that whatever stands against that freedom must be set aside, be it ritual or superstition or limitation in any form. "Set aside," came a voice from the multitude, "even if it be the Law of the Flock?" "The only true law is that which leads to freedom," Jonathan said. "There is no other."
(From Jonathan Livingston Seagull by Richard Bach)
At two hundred fifty miles per hour, he felt that he was nearing his level-flight maximum speed At two hundred seventy-three he thought he was flying as fast as he could fly, and he was ever so faintly disappointed. There was a limit to how much the new body could do, and though it was much faster than his old level-flight record, it was still a limit that would take great effort to crack.
In heaven, he thought, there should be no limits.
(From Jonathan Livingston Seagull by Richard Bach)
display:none;